After a short winter period Petrie Island was flooded to the highest level in many years during April and May. Floods caused damage to the causeway, which delayed repairs to the beach and picnic area and the area was not officially opened until late June. Petrie Island and the road was closed for 60 days.

Beavers were very active during the flooding, debarking many large Cottonwood trees, many of these trees were in higher elevations where the Beavers would not normally be able to reach them. Fopi members managed to wrap about 10 large trees to save them from dying. The City came in to remove over 60 large dead Ash trees in January and planted 95 trees and shrubs in October as replacements.

FOPI received grants to hire five students from Canada Summer jobs. Unfortunately most of the school tours had to be cancelled due to the flooding. Only two of fifteen scheduled tours were held at the end of June. Our adult tours and clean ups were cancelled, however we did run our successful Naturalist programs and summer tours. Due to the flooding we were unable to use our nature centre as it was closed while being evaluated for mould and structure damage. We also lacked power and had to operate with a generator, displays and other equipment were moved to our tent area which became our operation headquarters. The City removed mould and damaged materials from the nature centre in September and we are still waiting to find out what renovations will have to take place.

We continued our Wednesday adult workdays on a variety of projects to maintain the picnic area trails and repairing and restoring picnic tables and observation benches.

The Membership program was cancelled which included three clean ups, educational tours, removal of invasive species, all due to the flooding and reconstruction of the area. We did send out regular dispatches to members starting in May. Many people offered to help with restoration work in June but were unable to help as the island was inaccessible. By the time we were able to get in we were working on our summer programs. FOPI held one clean up in late June in cooperation with the World Wildlife Federation that included a display trailer from the Vancouver aquarium. We also hosted the release of 400 young Eels into the Ottawa river in cooperation with the Ottawa Riverkeeper, Environment Ministry staff from Ontario and Quebec.

We continued to support Kayaking at Petrie Island with the Petrie Island Canoe club under Sarah Kennedy. They ran full day camps during the summer using the FOPI tent and picnic area for parts of their program. We participated in the Cross fit event and received $3200.

Despite the difficulties we completed our 20th year of operation. We would like to thank members for their support of our programs which will continue in 2018. We plan to have some celebrations next year to mark our 20th.

As we now find ourselves at the end of August, the season is starting to wind down. The city will finally be coming in soon to remove the mold and debris from the nature centre. This will include removing the tile flooring and the insulation from the walls. When this is done, they will do a final evaluation of the building and decide what improvements need to be made to restore it. Although we lost many school tours during the spring flooding, we did have several summer tours for camps and home school groups. The naturalist programs were successful as usual and were well attended. A good portion of the summer workdays were spent restoring benches, picnic tables, and observation platforms.  The Wednesday workdays will continue into the fall and the educational displays and signs will be out through September. Most of the protected turtle nests are still intact and we are waiting for the hatchlings to emerge. The executive would like to thank the summer students Shannon, Diana, Robert, Emily, and Sarah for their work on the island this season, and wish them all well in their studies. We would also like to thank all of our members and volunteers for their support. It was a difficult year but we still continued to strive towards our goals of protecting the wildlife and educating the public.

Last week Friends of Petrie Island hosted an Eel Release Day in partnership with the Ottawa Riverkeeper, Canadian Wildlife Service, and Ministry of Natural Resources. Four hundred eels were tagged and released into the Ottawa River at Petrie Island. The event brought out many volunteers and spectators, and we would like to thank everyone who stopped by! For more information on why the eels were released, see the following news article: http://www.cbc.ca/news/canada/ottawa/researchers-tag-release-eels-ottawa-river-1.4202694

Elsewhere on Petrie Island, many wildflowers, trees, and shrubs have begun to bloom! We are identifying as many as we can with informational signs along the trails and in the wildflower garden. Unfortunately, many of our reference books that we often use for plant identification were damaged or lost in the flood along with many other items. If any of our members have any plant or animal reference books we would welcome any donations! If you have no books and still wish to help, we are still accepting monetary donations and new/renewed memberships.

Our picnic area, trails, and beaches have been mostly cleaned of the flooding debris and damages. The nature centre is still closed, however, and we currently have displays under the white tent for the public to browse. We are looking into getting a trailer to store our equipment and displays while the centre is closed. The power has not yet been restored to our buildings, so we have been using a generator in the meantime.

We had a very successful cleanup with WWF two weeks ago, thank you to everyone who came out. Our Wednesday Workdays are still ongoing, executives and other volunteers meet at 9am every Wednesday, everyone is welcome to drop by and help out. For those who cannot make it on Wednesdays, please feel free to stop by the island any day between 10am and 8pm, we can always use extra help!

Now that July has finally arrived, our FOPI events will be in full swing! The junior and youth naturalist programs started this week and will be running every Tuesday and Thursday. Next week on July 12th  (weather dependent), we are planning an Eel Day with the Ottawa Riverkeepers/Sentinelle Outaouias. They will be releasing ~400 eels into the river and will have informational displays about their activities. We will be updating with further events as they are planned.

Finally, turtle nesting season is coming to a close, but we just wanted to remind everyone to keep their eyes out for turtles on the roads and trails, and let us know of any turtle activity you see!

Just a quick update about Petrie Island. Currently, due to construction on the causeway, there is no vehicle or pedestrian access to the island. We do not have a date for when access will be restored, but we will keep you updated. Once we are able to get onto the island again we are planning a cleanup with volunteers from the community, so stay tuned for details!

Water levels on the Ottawa River have now receded enough that Petrie Island is accessible by foot. The road, however, is still closed due to damages at the culvert. Some of our members and staff were able to walk in to the island this week to assess the damages and start the cleanup. While there was considerable water damage to several buildings, most of the debris has been removed and sorted through, and the floors have been cleaned of all of the mud. The picnic area is in relatively good condition, however there is still debris that needs to be moved and paths that need to be restored. Most of the trails are still under water along with part of the picnic area, but we are hoping they will be accessible soon. In the coming weeks we will be needing volunteers to help with cleanup and trail maintenance so we can start our programming as usual. If you are interested in volunteering please email fopistaff@gmail.com for more information, or stay tuned here for more information on FOPI workdays.

Just came back from a little paddle around the island.  The current on the second causeway bridge was very strong- there will be a lot of erosion.

I am sorry to say, there are still at least a dozen very large beavers.  They were all huddled together, in a big furry pile.  I paddled right up to them, and they made adorable little grunting noises before evacuating the one remaining mound that’s still out of the water, near the quonset hut… One of the engineers that works with me is on the South Nations Board, and says that you can hire trappers through the conservation authority.  They’ve gotten at several big trees in that area- tons of new damage!

As bad as the flooding is in 2017, spring flooding has occurred before.  Here is a photo of the Grandmaitre cottage (now the interpretive center for the Friends of Petrie Island), probably taken around 1962.

We were kayaking through Petrie Island today. — Bruce Webster

We would like to thank you all for your support in the past year, and looking into 2017 it is time for membership renewals! Attached is the form for membership renewal; note that the email on the form is outdated, please use this email (fopistaff@gmail.com), or mail directly to 1395 Sault Street, Orleans ON, K1E 1G8

We are very excited for the upcoming summer season on Petrie Island. Our summer students are currently planning events and preparing for our opening in the next few weeks. Unfortunately due to extensive flooding the island is inaccessible by car at the moment, but we are hoping to open once the flooding recedes.

On April 21st, grade 7 and 8 students from Ashbury College came to Petrie Island to help with an Earth Day Cleanup. Because the island was flooded, they ended up cleaning the shoreline across from the island, but still had a lot of fun and collected 20 bags of garbage.

In late April a few of our volunteers ventured out into the waters to check the flooding levels on the island. As you can see in the pictures below, the flooding is almost up to the floor of the Nature Centre. Although many structures have shifted, most are still in good condition. We will definitely be needing extra volunteers in the next few weeks to help clean up the damage from the flooding.

More updates to come about the programming in late May once we are open. If you have any questions feel free to use this email address. We hope to see you out on the island very soon! 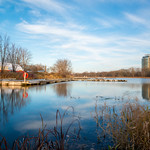 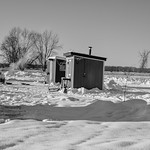 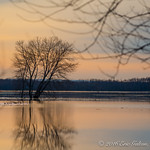