Over 7 km of easy walking trails offer spectacular views of the Ottawa River and peaceful wetlands with an abundance of wildlife and lush vegetation.

Nature Trail Etiquette
Rules are in place to protect the ecology of Petrie Island now and ensure it is available for the next generations. The park is open from 6 am to 9 pm daily.

⦁ Respect nature- Please stay on the trails and do not disturb or harass animals or damage plants. Petrie Island is home to many endangered plants and animals. As well, you will be less likely to encounter stinging plants and biting insects while on the trails.
⦁ Dogs are not allowed anywhere on Petrie Island as it is an ecological reserve. This protects nesting birds and prevents harm to plants and trees.
⦁ Do not feed the wildlife. Feeding makes animals overly friendly/ aggressive and encourages dependency.
⦁ No fishing except in designated areas on Basswood and Sunrise Trails, and along the causeway. Fishing line and lost hooks are hazardous to wildlife- please retrieve line, hooks and lures for safe disposal.
⦁ Do not damage, pick or remove any plants (including fallen trees or branches and springtime fiddleheads) or animals (including frogs and turtles). This potentially harms the overall balance of Petrie Island’s ecosystems, and it is illegal.
⦁ Bikes are not allowed on nature trails. They may damage the trails and surrounding vegetation and may be hazardous for adults and children enjoying Petrie Island.
⦁ Leave no trace. Litter will negatively affect wildlife and the environment.
⦁ Camping and charcoal grills are not allowed on Petrie Island. Fire permits are required for the two fire pits.

Be respectful of fellow visitors. Loud noise, taking excessive space on the trail and unexpected passing (joggers and bikers please note), detract from the peace and relaxation that people come to Petrie Island for.

Take time to enjoy your visit. There are many physical and emotional health benefits to time in nature. Being mindful of your surroundings will result in a much more rewarding nature experience:
-Walk slowly and quietly
-Pause to observe your surroundings
-Look up into the sky and upper trees- and catch sight of a skein of geese flying over or an inquisitive squirrel
-Look down beside and on the trail- watch for frogs tucked into the reeds, pollinators on the plants, animal tracks, shells from turtle eggs or clams, maybe a little garter snake
-Move your eyes and your head in all directions- even looking behind you. Many animals stay still until you pass them by
-Listen for movement or animal noises- birds singing, beavers slapping their tail, frogs croaking, squirrels chattering, woodpeckers tapping, leaves rustling
-Many plants have smells- like ferns and wild mint

Bring along your camera to capture the moment.

CAUTION: Petrie Island has areas of poison ivy. Leaves of 3- let it be.
Some people have strong allergic reactions, even with brief contact. Poison ivy has compound leaves divided into three leaflets; the green leaves are tinged with bronze in the spring, a vivid red in the fall. Very small flowers found below the leaves produce waxy white fruit.

Turtle Trail – 300 metres (900 feet)
Average time 15 minutes- it joins Bill Holland Trail
Our most celebrated residents are our turtles. This trail offers the best viewing of basking turtles; they climb on planks and fallen trees to catch sun from spring to fall. Turtle Trail is also a great spot to see the glossy American Groundnut and the aptly named white Turtlehead flowers. Our resident nesting turtles are:

Painted (Special Concern) The most common turtle, it has a dark shell (which is called a carapace) and yellow and red stripes on its face and neck.

Map (Special Concern) It is distinguished by a ridge running down its carapace and a serrated edge by the tail. Note the topographical markings on the shell and the yellow stripes on the head and limbs.

Snapping (Special Concern) The largest turtle on Petrie, snappers have a relatively small shell, large beaked head and spiky tail. They most often seen when laying their eggs as they do not bask. They can live up to 100 years. Do not attempt to touch.

Occasional sightings
Blanding (Threatened) The bright yellow throat and chin are their outstanding characteristic.
Musk (Special Concern) Tiny musk turtles live almost entirely in the water. They are called stinkpot turtles as they emit a skunky smell when disturbed.

All turtles in Ontario are at risk. Our turtle conservation program tracks numbers of basking turtles, protects nests of turtle eggs and releases hatchlings in late summer. As ectothermic reptiles, turtles burrow in the mud of Turtle Pond for the winter.

A turtle blind and two viewing platforms have been set up to help visitors watch the turtles without disturbing them. Turtle Pond is out of bounds for recreational water craft.

Bill Holland Trail– 2.4 km (1.5 miles) round trip. Average time- 40-60 minutes
Our premier trail runs parallel to the north shore of Petrie Island with two attached side loops offering vistas of both the Ottawa River and verdant wetlands on the interior of the Island. Start by going west from the Interpretative Area to see the dogwood maze, a fairy house and fantastical driftwood creatures. You can also see wildflowers such as Jack-in-the-pulpit, Starry False Solomon’s Seal and Cardinal flower.

The trail continues on the gravel road past a private home. The inland ponds on your left are home to waterfowl, frogs and the occasional muskrat or beaver. Monarch butterflies visit the milkweed that grows along the trail. A gate marks a more sensitive ecological area where bikes are not permitted. The trail follows an old causeway of rock and dredged sand that is popular with nesting turtles. Enjoy the cool shade of the deciduous trees until you get to the trail end at a ditch just past a wooden observation structure. You have an option to turn right and walk about 30 metres to the shore, but remember the far west end of the Island has no public access for ecological reasons.

Bill Holland Trail (BHT) is named for a local naturalist who catalogued wildlife on Petrie Island in the 1960s. Petrie Island is designated as a Provincially Significant Wetland and an Area of Natural and Scientific Interest. It is primarily sand and floods annually. The vegetation resembles the Carolinian forest and for several species, Petrie Island marks their most northerly existence. There are about 450 species of flora on Petrie with 320 being native and about 30, such as Cat Tail Sedge, being quite rare.

Wetlands are critical to the environment and biodiversity. They:
Absorb water during spring flooding and heavy rainfall
Filter out pollutants from the water and soil
Reduce effects of drought
Store large amounts of carbon and reduce greenhouse gases
Provide habitat for a wide variety of plants and animals

Loop Trails are attached to BHT – each adds about 100 m.

Panorama Loop– This trail climbs a rocky hill and features sweeping views of the Ottawa River as well as a sumac grove, many types of wildflowers and maybe the best spot for viewing the sunset. Watch out for the thorns of the black locust.

River Loop – This loop goes right (north) to the river where both marsh and beach habitats are found. Watch for animal and bird tracks in the sand.

You may also find fresh water mussel shells from the 17 species found in the Ottawa River. At risk species found at Petrie Island include American Eels, Black Terns, Least Bitterns and Monarch Butterflies.

Beaver Loop – This trail goes left (south) from BHT and showcases Muskrat Bay. It is known for its rare Hackberry trees and lush Ostrich Ferns. Hackberries are more typical of southern Ontario and the eastern US. They prefer moist rich soil and will produce edible berries that are eaten by birds and mammals. The cork-like brownish or gray bark is distinctive with deep ridges and bumps similar to warts. Leaves are oval with pointed tip and toothed edges.

Muskrat Trail – 800 metres (2600 feet)
Average time 30 minutes round trip. This trail goes south from the parking lot onto a peninsula. Enjoy the cool shade from huge silver maples, some larger than 100 cm in diameter. Chances are you will spot amphibians and water birds including grebes, mergansers, mallards and geese.

Basswood Trail – 1.5 km (4900 feet)
Average time 30 minutes round trip to walk south from the parking lot to the Causeway and return to the parking lot via the Sunrise Trail. This trail goes by a small craft launch and alongside Crappie Bay which is popular with kayakers and canoeists. You may be rewarded with sightings of beaver, muskrats, even a passing deer.

However, there are continued threats to the ecology of Petrie Island- erosion, invasive species, human activity. Trees in particular have been damaged by insects such as the Emerald Ash Borer, infections like the Butternut Canker, beavers which show a preferred taste for Cottonwoods, invasive species such as Buckthorn which crowds out native species, and extreme weather like wind storms and flooding.

A bike path joins the causeway to the parking lot and goes right through a former garbage dump from the 1950s. It is now a mixed deciduous forest and a great example of nature’s resilience.

This trail connects the causeway with the beach area by tracking along the East Bay. As suggested in the name, its eastern exposure offers lovely sunrise views. Watch out for protective Killdeers that feign an injured wing to distract intruders from their nests on the ground. The Sunrise Trail accesses a paved 2 km path that runs along the beach towards the picnic area. The beach is a great place to see the sunset.

Causeway/ Trim Road – 500 metres
This is not an official nature trail. The road leading onto the Island is the north extension of Trim Road with the causeway bridging the Island to the mainland. It is popular with people who walk over to the Island from nearby neighbourhoods. Fishermen, photographers, Great Blue Herons, turtles and even the occasional River Otter frequent the marshes. As the road is shared between pedestrians, cyclists and vehicles please exercise caution.

Jeanne D’Arc/ Queenswood Forest Trail – 2 km one way
This mainland trail separates the Petrie Marsh from the neighbourhood of Chatelaine Village. It connects with a vast network of nature trails in Orleans including the National Capital Commission path that leads all the way downtown. At the end of Tenth Line is the Queenswood Forest where the rare Heart-leafed Tearthumb plant can be found.
Dogs on leash are allowed along this trail.
Other trails in Orleans are found along Bilberry Creek, Princess Louise Falls and Cardinal Creek.

Getting to Petrie:
By Car- take the 174 east of Ottawa, turn left (north) onto Trim Road By Bike- take the bike trails that run between the Ottawa River and Jeanne D’Arc Blvd
By bus: Take the 38 or 39 to Trim Park and Ride or the 139 from Place D’Orleans Shopping Mall 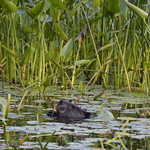 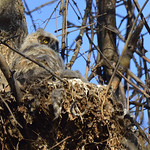 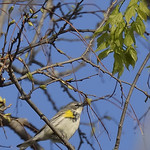