Paddle before the heat of the day…….While putting my canoe atop my car and tying down the last strap at 5:30 am, I became drenched with a sudden cloud burst of rain that didn’t last long. This didn’t stop me in my quest to go for a leisurely paddle around Petrie Island though.

I left the dock at Crappie Bay at 6 am with dark clouds blocking the rising sun and a cool chill was in the air. By the time I reached Muskrat Bay, the sun was beckoning its appearance within a blue sky. It was going to be a beautiful morning as I continued my paddle.

At Muskrat Bay, I noticed a huge white fish fly right out of the water and fall forward at a slant with a splash in the water. Putting my canoe in glide mode, I waited and soon saw swirls of water upon the water’s surface going in a loop pattern……and then it happened again. The third and fourth times, the fish was now in the middle of Muskrat Bay. And then it stopped…..this fish put on a spectacular show for me as it went “fly fishing” in its own way.

Rounding the westerly tip of the island, I was gliding about 10 feet from shore when I suddenly came upon a pair of geese with 5 goslings resting in the grassy sand. I was more startled than they. They must be used to canoeists and kayakers passing by constantly every day.

Between this point and the beaches, a lone sailboat, the Caroline, was anchored in the river’s current. People on board were still asleep, but I hope they had their boat lights on during the night.With little effort, a sculler passed by for his morning workout.

Passing the beach, crews could be seen emptying the garbage bins and readying the place for the hordes of people soon to arrive for the day.

Passing through the culvert and back into Crappie Bay, it was time to get off the water as an increase in temperature and humidity could be felt. Although, I didn’t see much wildlife, I sure heard them…….and that made for a great outing….. 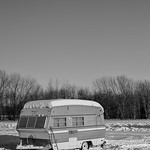 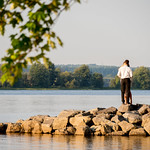 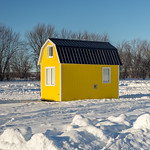